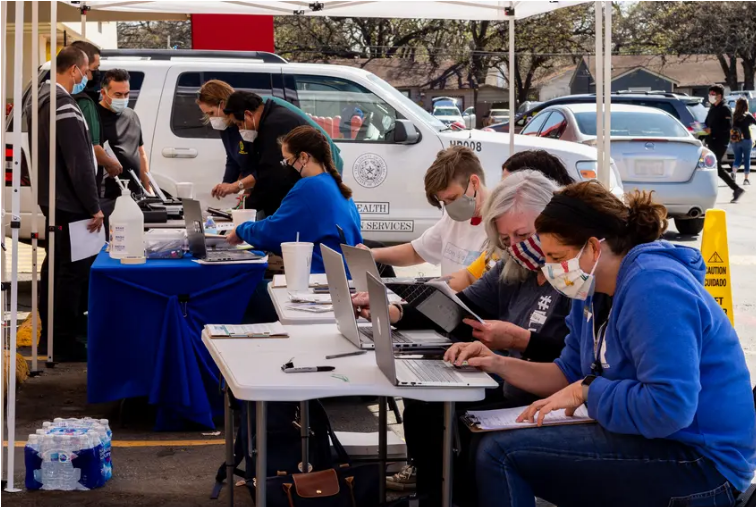 It wasn’t that she didn’t try to get the vaccine. María Gilberta Reyna had attempted to register through a Dallas hospital’s online application, but she never managed to make it work.

“I would put my information but the site would throw me back to the initial page,” Reyna, who is a Mexican immigrant, said in Spanish....

Hispanics in Texas have been hit particularly hard by the pandemic. Not only they are the ethnic group with the largest share of COVID-19 related deaths — they represent just under 40% of the state population yet more than 46% of the deaths linked to the virus — but they’ve also been severely impacted by the economic disruptions during the pandemic, particularly in the service industry and other blue collar jobs.

Leslie Armijo, a member of the organization Don't Wait to Vaccinate who helped run the registration event at the Dallas grocery store on Friday, said lower income people have bigger hurdles in getting vaccinated....But one of the biggest problems Armijo and others have seen as they try to help Hispanic and Black Texans get vaccinated is a lack of trust in government. Gonzales said that the rhetoric and immigration policies of former president Donald Trump eroded some people’s trust in government, especially undocumented people. Many remain concerned about giving any personal information to government agencies at any level.

“They have to bring the vaccines into churches and other institutions that they trust in, because there’s so much fear of the government,” said Josephine Lopez Paul, lead organizer with Dallas Area Interfaith. “They’ve partnered with us in the past for health fairs, but now the thing that is holding things up is the vaccine supply.”

Hispanic Texans are Still Struggling to Get Vaccines. Here’s How Dallas is Trying to Change That. Texas Tribune [pdf]